Written and directed by Chris Lincé 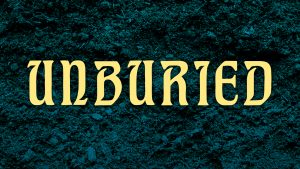 In the subsequent decades, its existence has become the stuff of myth. But as its 40th anniversary approaches, it’s time to dig up what little information we have on this enigmatic footnote in television history…

Join Folk Horror enthusiast, Carrie Thompson, as she conducts a personal investigation into the cracks in our collective memory. Beginning with a study of British television classics such as ‘Children of the Stones’, ‘The Owl Service’, and ‘Doctor Who’, Marx leaves no stone unturned as she unearths a terrifying mystery, buried in our cultural past.

“UNBURIED is a masterpiece of alternative storytelling.”

“Thoroughly gripping… This is horror for the 21st century.”

“This show is a textbook example of how true horror isn’t a product of big budgets and complex pyrotechnics. …I’ll be there opening night for whatever Hermetic Arts does next.”

“BLOODY HELL THAT WAS GOOD.”

8 May 2019 at the Bosco Tent, Brighton (presented by the Odditorium)